Below are three posters from approximately 1974 when the CME did an ad campaign mocking communist countries. I can recall seeing one mocking Yugoslavia in an office but I haven’t seen it again. If anyone has a copy, please submit it! 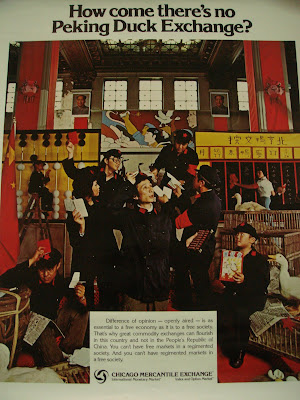 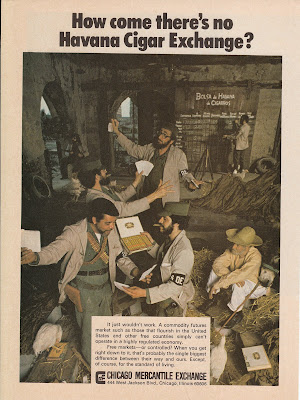 How come there’s no Havana Cigar Exchange? It just wouldn’t work. A commodity futures market such as those that flourish in the United States and other free countries simply can’t operate in a highly regulated economy. Free markets – or controlled? When you get right down to it, that’s probably the single biggest difference between their way and ours. Except, of course, for the standard of living. How come there’s no Moscow Mercantile Exchange? Millions of potatoes, cabbage and other commodities change hands in the U.S.S.R. every year, but not a ruble’s worth is traded on any futures market. In a regulated economy, the price of a head of cabbage is exactly what the government says it is – no more, no less. Does their system work? Apparently. Does it work as well as ours? You’ve got to be kidding.