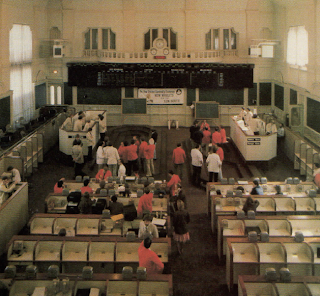 The New Orleans Commodities Exchange began it’s short run in 1981 before moving to Chicago to become the Chicago Corn and Rice Exchange in 1983 where it was subsequently absorbed by the MidAmerican Exchange (MidAm) in 1986.  There is very little mention of the exchange but Charles McCain wrote an article in 1981 which does a great job of describing the exchange and the original copy also shows photos of the trading floor:

SOLD!  Bidding on Tomorrow At the Commodity Exchange pdf copy
if you don’t have a .pdf view you can use this link as a regular text copy: link

I first learned of the exchange in 1998 as I saw it on my road map during a visit to New Orleans for Mardis Gras.  One morning to help walk off a hangover acquired on Rue Burbon, I wandered into the building named the New Orleans Board of Trade which at the time still had the exchange’s wall boards noting prices of the Rice and other grain contracts.  Now the building is mostly used for events like weddings, etc… and is worth taking a peek at next time you’re in NOLA although I’d imagine the wallboards are gone by now.

***********UPDATE*********
“KC” posted the following in the comments sections and it’s so important it needs to get bumped up to the main page.  Thanks KC for the wonderful commentary and educating us all on the New Orleans Exchange!

“The New Orleans exchange came to Chicago a few months after they closed in NO, the open interest had become dominated by Merril Lynch and Merril was critical in shutting the doors and settling contracts. I don’t think that the Gulf delivery soybeans and corn made the move but the rice and cotton contracts did. The cotton contract traded briefly under two different contracts but was never successful. The exchange (really just the rice market) traded on the Mid-Am floor as the Chicago Rice and Cotton Exchange, initially on the Mid-Am floor on the 2nd floor of the Insurance Exchange Building just west of the CBOT Building and then on the Mid-Am floor in the old CME at Jackson and the river before the rice moved to the CBOT ag floor where it shared a pit with wheat options and corn options where the current corn option pit now stands. At that time the Mid-Am moved to the current out trade room on the CME/CBOT floor, which was before the Mid-Am moved to the old bond room and then to its current place on the grain floor.

The cotton contract never took hold, it was a longer staple cotton than what is traded in NY, I recall that they had problems with delivery, which was also a problem in the rice market. Rice originally had a delivery area that stretched from Arkansas to Texas, it was later restricted to the counties around Stuttgart, Arkansas. The larger delivery increased basis risk.

A number of the old New Orleans exchange seats were originally sold to Chicago grain traders due to the Gulf delivery mechanism and frankly, the lure of New Orleans as a business destination and there is still one member on the grain room floor who came from the New Orleans exchange and is likely in that photo. KC”