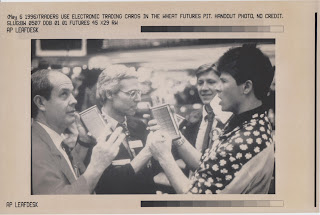 When pit traders thought of automated trading, one of the early concepts was to use handheld terminals rather than cardboard trading cards and although an effort was made to convert traders to using them, it didn’t gain much steam.  The concept of electronic trading cards was developed shortly after the FBI sting so in 1990 the CBOT and CME began their effort to find the vendor for electronic cards.  One reason why the developement came after the FBI sting was to enhance the audit trail of trades and the FBI sting highlighted the flaws in the existing audits.

As with any sort of evolution, the push for electronic cards was a difficult one although in 1991 testing began in mock trading sessions.  The above photo is from 1996 and the caption reads that only 10 traders at the CBOT used it with regularity and at the time there was noone at the Merc who used it outside of mock trading so shortly after the effort was discontinued.

I don’t know at what point the electronic card program was discontinued within the pit but it came back in different incarnations.  One thing that was pushed during the short time I clerked for a desk at the CBOT (late ’99-mid 2000) was electronic order tickets from the desk to the pit broker although I forget what the name of the software/program was.  For the past decade or so, the CME has provided handheld, wireless GLOBEX access to floor traders and I think that the software is proprietary and only used for such handhelds.