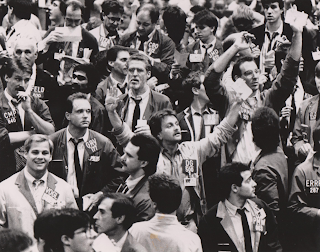 In the above photo is an undercover FBI agent, can you guess who?  I’ll give the answer at the bottom of the post.

In the 1986, the FBI began an investigation into corruption in the Chicago trading pits at the urging of commodity firm Archer Daniels Midland who helped hire and train some undercover agents.  At the CBOT the codename was Operation Sour Mash and at the CME it was given the name Operation Hedge Clipper.  In January 1989 the investigation was closed as details began to leak out and the Chicago Tribune was ready to break the story which resulted in 46 traders being indicted on over 1,500 counts including, racketeering, fraud and lying to the Feds.  Once the news of the investigation broke, the FBI continued to have undercover agents work on the floor to listen to the fallout.

The NFA records of the undercover agents continue to exist under their alias at the NFA’s BASIC background records which all current and former floor traders are required to be listed.

For anyone wanted to read more about this fascinating episode, I highly suggest the book Brokers, Bagmen and Moles which was put out by a couple journalists. 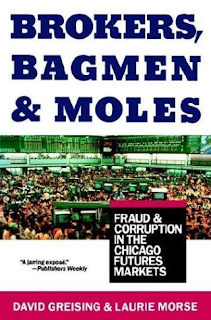 For the lazy, here is a NYT article written a couple weeks after the sting was announced:
F.B.I. Commodities ‘Sting’: Fast Money, Secret Lives

Answer to trivia question: VOGL in the lower left corner was FBI agent Dietrich Volk, alias Peter Vogel who was given the background of being the nephew of a wealthy Uruguayan who wished to get further into commodities trading.