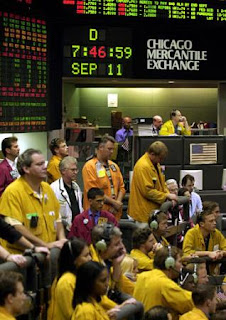 photo credit september11news.com
(that photo w/me in it is from 2002 during the moment of silence)

I wasn’t going to write a 9/11 post like every other blog, media outlet, etc…. but with a little time on my hands while babysitting some trades, figured might as well show a different perspective.

Unlike most people who can recall how they watched the attacks, I was asleep during the entire morning on 9/11 since I was working nights for the trading group and must’ve been on the train going home when the first plane struck.  Like most mornings, I went immediately to sleep once home until 2 or 3 in the afternoon.

Not to get off tangent but the old way of doing things for a lot of trading groups such as the small one I was with had the junior guys start clerking on the floor for a bit then switch to working the overnight shift which involved doing a little trading and watching orders for everyone else in the group.  It paid $1800/month and required working 14 hours/day from 530pm to 730am five days a week.  Being only 21 at the time made it a lot easier but even one of my mentors who was a University of Chicago MBA, worked five years at a Big Four accounting firm, and married did the same for $1500/month.  Only reason to note this is that a lot of traders took a long road and often a step down to get the opportunity to trade.

Waking up around 3 in the afternoon it was stunning to read on the internet that the towers were gone and the entire cycle of events took place while I was sleeping.  Just a month prior, I was at NYMEX for a week and every day my routine would be to take the train from the hostel I stayed at to the WTC, get a muffin and coffee then walk outside to sit between the towers before walking over the footbridge to the World Financial Center and NYMEX.

On the evening of 9/11, the group said I didn’t need to go in because everyone got flat or very hedged during the trading session but I remember looking to see that SIMEX eurodollars reopened on the high print that night as the market panicked.  Without having to go into the office and not having a tv at home, I went nearby my apartment to the Old Town Ale House which only had a few old guys in there drinking and watching the news.  The single most memorable moment of 9/11/2001 was at that bar when a sixty year old black gentleman put money in the juke box to play this song: