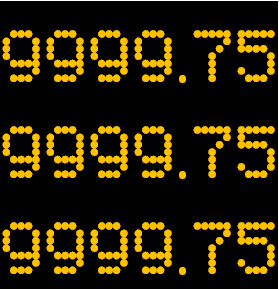 Today’s surprise announcement of central bank coordination brought to mind surprise announcements in the past and the most memorable one for me was October 15, 1998 when the Fed cut interest rates just after the bond market closed.  The graphic above of what I saw on the KCBT wall boards was eternally burned into my mind as a result.

Back in 1998 I started out like most at the KCBT as a pit reporter and remember being assigned to work the lightly traded Western Natual Gas contract late that day in October.  Being a pit reporter for the natural gas or Value Line stock index (both no longer trade) was a pretty boring job and most of my days were spent reading magazines, bugging traders for their opinion or looking at charts on CQG.  At the time there was plenty to watch in the market as the Long Term Capital saga was unfolding which lead the Fed to a surprise interest rate cut at 2:14pm CST one day.

Like every big announcement, everyone had an “oh shit” response and immediately eyes turned to the e-mini S&P; 500 contract which was launched just a year prior in September 1997.  The emini started soaring higher and it quickly went out of control as the market was exhausted of sell orders and the gaps between prices printing got larger and larger before finally going bid 9999.75 which was the highest price the globex system was designed to handle even though the S&P; was trading that day around 1050.  Since then many safeguards have been built by Globex to prevent a similar glitch from happening again.

Eventually the CME busted or adjust all trades above 1085 but in the meanwhile the emini S&P; was broken and anyone needing to trade had to send orders for fullsize S&Ps; in to the CME pit.  The problem for many was that the ratio was 5 eminis to 1 big S&P; so anyone who was short an odd number like 3 and bought a big spoo got net long.  One friend had that situation and he was so pissed off by the market ambush that it was his final day trading.

Charlie D. famously said that “the only traders in the history of the Board of Trade who have consistently made money over time are the spreaders.”  There are a handful of reasons to backup his assertion but the biggest is that spreaders are hedged and thus less likely to get a knockout punch by a surprise announcement.  To consider and guard against any possibility brings to mind the following quote from Guys and Dolls:

The following article from the December 1998 issue of Futures Magazine summaries the day the emini S&P; printed 9999.75

And this is just one illustration of the various surprises and panics that traders have to go through.  I love to sit and listen to legitimate traders from the floor tell old stories and how they made it through the craziness.  Previously I made the assertion that the closest equivalent to trading is bullriding and continue to stand by it, thinking of what the PBR‘s doctor said in an interview that “wimps don’t make it this far” and certainly the same applies to independent traders who have been through decades of panics because all it takes is one day to get knocked out.