In finishing up some details for the hand signal book (for reals, it’s pretty much done) I wanted to take a look at some stuff in London and it was disappointing that Guildhall and City Business libraries have virtually nothing on the LIFFE floor.

One positive thing to come out of the excursion to Guildhall is that walking through the square I noticed that the LIFFE trader statue is now in the hall.  Initially I figured they removed it due to the backlash against the financial industry but walking by the original location it turns out they had to move it because of a huge construction project where it previously stood. 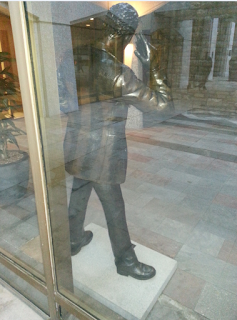 photo of the statue as seen from Guildhall Sq today 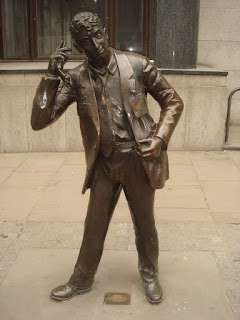 Here’s what the statue looks like from when I saw it years ago in it’s original location across from Cannon Street Station.

Battling some serious jetlag and disappointed by the library documents, I had to smile upon hearing the radio station I stream from Austin play London Homesick Blues this morning