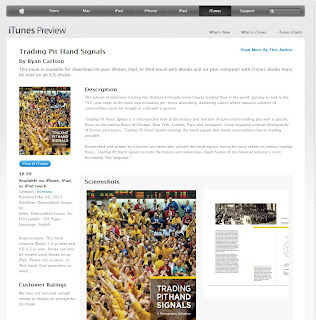 To celebrate World Book Day yesterday, the book Trading Pit Hand Signals finally launched in Apple’s Ibooks store!  It was certainly a long time coming to get to the point that the book could be presented publicly and we’re working on increasing distribution. Sales are authorized for 51 countries which include most of the Americas, Europe and Oceania but Asia such as Singapore/HK is not able to purchase right now.

Here is the link to the Ibooks store and once downloaded, my suggestion is to read it with the ipad turned sideways so both pages are displayed simultaneously:
https://itunes.apple.com/us/book/trading-pit-hand-signals/id639785084?mt=11

The decision was made to initially launch through Ibooks because it’s the best platform to maintain the original design of what will be a physical print book.  The e-book marketplace is extremely fragmented and there are vast differences between rival platforms. Complicating this further is that this book is a ‘fixed-format’ book (think coffee table style or children’s illustrated book) which requires an e-book platform to show it exactly as it would appear in physical print form as opposed to “fluid format” (think novel) that is largely text and can shift as necessary on various platforms.

We do have a Kindle version ready to go but are withholding it for the time being because there are many platform issues which could be confusing for consumers.  For instance, a fixed format book can only be read on the Kindle Fire device and not on earlier versions of the Kindle device or the iphone, ipad or android Kindle apps.  There are a few other issues we have with putting it on Kindle so unless there are huge requests for it, we’ll most likely not be doing so.

The print version is in the works but it won’t be delivered for a few months in my estimate.  We’re currently working w/an amazing print house but I’m not going to leak details until things move along further.  Although we intended to keep everything onshore regarding printing, the pricing difference is so vast that the prepress will be done in the US and then transferred to China for the actual printing.

Hopefully everyone enjoys the book because I do feel it’s an accurate and honest portrayal of trading pit hand signals and how the futures pits functioned.  My aim was to keep it light and readable rather than descending into more academic details than necessary although the book is based upon an obsessive amount of roughly 400 hand signals used to trade!

Besides this posting there won’t be much done to promote it as speaking w/bloggers or journalists is generally a waste of time, so if you like it tell a friend.  The list price on Ibooks is 8.99 and w/a 70% cut, that works to just over six bucks back my way so I look at it as people just buying me a beer or two when they like the book.  Except for the impossibility of it becoming a New York Times bestseller, there is zero chance of me recouping the investment into it but you can’t put a price on satisfaction.

When I get a bit more time I’ll share some further thoughts on the book industry appears from a novice’s perspective but in the meantime I hope everyone enjoys the book!