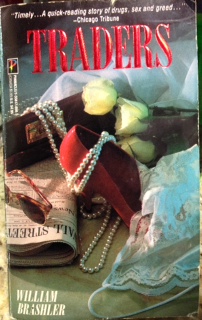 Moving from highbrow to lowbrow but still set within the long bond pit, my reading stack shrank to finally allow the opportunity to read former WSJ reporter William Brashler’s fictional novel Traders. Before my take on it, here is the 1989 review from the Chicago Tribune.

I felt that the book was pretty good, although it was a guilty pleasure reading it because I almost never read fiction.  The storyline stretched belief at some points but was generally solid and the various subplots also kept me picking the book up at every opportunity.  Since Brashler spent a long time around the trading floor in his role as a journalist, the characters and dialogue were incredibly realistic (too realistic almost) to the point I felt transformed back to the CBOT floor in the 1980s occasionally.  My primary critique is that the characters, particularly the protagonist, should’ve been a bit older in age to be more believable.  The book also gets pretty lewd at some points but hey it was the 80s and I figure there’s more reality in some of the stories than most would realize (back then “blocker” didn’t mean a block trade apparently, LOL).

Traders is a great book to add to your stack and someday it’ll make a great read when you’re in the mood for a book on trading but one that requires zero thinking.