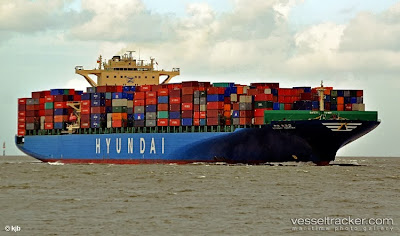 I know it’s hard to believe that such a high quality book could arrive on a ship which shares the name of two mediocre car companies but indeed, the Hyundai Mercury is currently somewhere off the Aleutian Islands and will dock at the port of Tacoma in 4-5 days with the books.  After that it should clear customs and get delivered to the distribution center the week after Thanksgiving.  The distributor’s online cart isn’t working due to a bug in shipping calculations but once it is then I’ll throw a link up.

The print run is only taking up, in my estimate, about 1.5 to 2 cubic meters which is just a portion of a standard 20 ft container which holds 26-28 cubic meters.  Pretty mindblowing to think of the scale of goods which fit on an entire ship but if you’ve ever been in a Costco then it’s no wonder that magnitude is necessary.

I think it was mentioned previously but the reason we didn’t print onshore in the US was the cost would’ve been around double what it was to print in China including the shipping (roughly $12-15 in China).  Even if every copy was sold, I’d still lock in a monetary loss of around 40-50% due to other production costs on a low print run but hopefully another print run can be had in the future to cut that.  Right now the suggested retail is $30/book which is reasonable and below other comparable books, because I’m a man of simple needs.

It’s been an interesting diversion to engage in physical goods for once as trading futures is so frictionless.  Last year in Singapore while meeting a friend who trades physical grain, he was complaining about the logistics of contracts, shipping, settlements, etc… and his boss who joined us for a beer remarked that my friend wanted everything to be as easy as “selling it to the screen.”