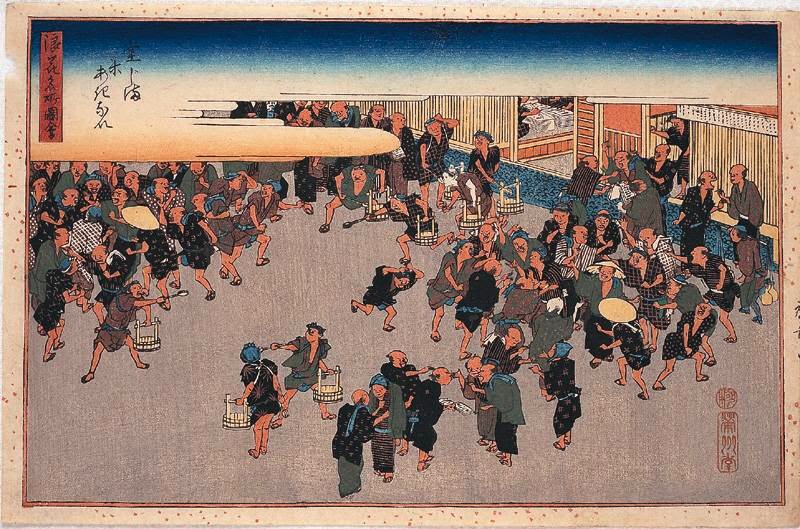 I really enjoyed reading the Harvard Business Review study on The Dojima Rice Market and the Origins of Futures Trading and highly suggest it to all who have an interest in the early history of futures trading.  It’s a quick read at 21 pages and well worth the $6.95 cost.

The Appendix of the case study shares a wonderful story, written in 1706, which illustrates that some aspects of trading just never change. The story also records the first use of hand signal arb that I’ve seen so it’s also an exciting historical reference!  Amusingly, what can be considered the first of a long line of dumbass trading clerks is also part of the narrative.

The race to minimize latency continues ever more so today and like the impending Virtu IPO filing which noted a near perfect string of winning days, except for one losing day due to human error, it’s not that far removed from this story from 300 years ago:

Mayuka Yamazaki.
There was a merchant named Yozaemon Sumiya who had lived in the town for a long time. He had run a liquor business and recently started a wholesale business selling clothes. He was one of the three most influential figures in the town. Yozaemon’s first son, Yomiji, was 23 years old and said to be the most dexterous person in the country. . . . One day Yomiji told his father Yozaemon, “Recently, neither the liquor nor the clothes business is making much money. The margins on these businesses are not high. . ..What I have been thinking is that it would be impossible to make my own way in life without being involved in a large-scale business. As a start, I would like to visit a wholesaler in Koriyama and examine the rice business there.” Yozaemon thought what Yomiji said made perfect sense. . . . Yozaemon collected all the money he possessed, gave Yomiji 600 ryo of gold, and dispatched his son to Koriyama.
As soon as Yomiji arrived at the wholesaler in Koriyama, he started a moneychanging business. In order to get information about daily prices at the rice exchange, Yomiji hired a regular express messenger (hikyaku) and another messenger. A minute after the rice exchange started the business of the day in Osaka, the [second] messenger wearing red hat and red gloves ran like a flying bird and arrived at Kuragari Pass. He stood by a landmark pine tree and tried to regain his breath. If he raised his left hand by 1degree, it meant the rice price increased by 1bu of silver. If he raised his right hand by 1degree, it meant the rice price decreased by 1bu of silver. His role was to inform Yomiji of the increases and decreases of rice prices. Yomiji saw the person’s signals from the second floor of the wholesale store using a telescope which had a range of 10 miles, and bought or sold rice taking these price changes into consideration. After that, Yomiji [publicly] dispatched the express messenger to Osaka to obtain the rice prices there. As Yomiji knew the rice prices earlier than anyone when the information was delivered to Kuragari Pass, there was not a single day that Yomiji did not make money. Other merchants had no idea about his scheme. They gave Yomiji the nickname “Forecasting Yomiji” and rice prices in Koriyama came to be greatly influenced by Yomiji’s transactions.
One day, when the messenger was running to give Yomiji his signals, he met a merchant returning from the Yamato region by the name of Sogen Nakamachimaruya . . . . Sogen was in a good mood after having a few glasses of sake and he asked the messenger to have a few drinks with him. The messenger, feeling great after a few glasses of cold sake, recounted various stories he had heard during his 10-day stay in Osaka. . . . He had another two to three glasses of sake. The messenger then parted with Sogen, saying that he would treat Sogen in the future, and started to run again. The road was rough. . . . He was late. He made his best effort to run as fast as he could, swinging both his hands like a crab, but ended up arriving at the pine tree four hours later than planned, as 7–8 glasses of sake had broken his stride. Yomiji was waiting and waiting, sitting on the second floor of his wholesale store and constantly looking into his telescope . . . . Finally the messenger in a red hat and red gloves appeared and stood by the landmark pine tree. The 7–8 glasses of sake greatly affected his memory, and he did not recall whether he should raise his left hand or right hand. He tried hard to recall, but he could not remember anything. . . . Finally he raised his left hand by 6 degrees, and Yomiji bought 30,000 koku of rice, believing that the rice prices had increased by 6 bu of silver. . . Actually the rice price was down by 7–8 bu of silver on the day and the express messenger soon brought the news. . . . Yomiji realized he had made a losing transaction, but it was already too late. The loss cost him 24 kan (90kg) of silver.