One of the rarest pieces in my collection is an original button celebrating the launch of GNMA “Ginne Mae” bond futures at the CBOT in 1975.  The Ginnie Mae contract was the first interest rate futures listing ever traded and established a lot of standards with which financial futures continue to use today.  For a complete history behind the efforts to create the Ginnie Mae contract, there is no better source than to read Dr. Richard Sandor’s excellent book, Good Derivatives, as he shares his experience having been the primary developer of the contract and hence interest rate futures.

Here is a brief summation from Good Derivatives regarding the practical origin of certain aspects which continue to be used in financial futures:

– The tick size of $31.25 or 1/32nd was established as a happy medium because the end users of these bond futures needed a bigger tick size than the grains, yet this increment also was smaller than the spot and forward markets at the time.  One benefit of the increased tick size (relative to the $12.50 in grains) was that it was more attractive for market makers to trade which also increased liquidity.

– Quarterly contracts were established to maintain a similar synch w/company financial quarterly reports. The quarterly calendar differed from grain expirations which revolved around the growing cycle.

– Trading hours were initially established to be 8:35am to 2pm in hopes that grain traders would be attracted to trade it before and after regular grain hours of 9:30am to 1:15pm.  Sandor noted that if the GNMA hours would’ve been the same as grains, then noone would’ve left their profitable trading in the grains to trade Ginnie Mae’s so by adding a little extra time onto the grain hours, the Ginnie Mae would get additional liquidity on the open and close.

– Contract size of $100,000 was established because it was the rough equivalent to the volatility in a standard grain contract and could have the same margins.

– The cheapest-to-deliver concept was established with these Ginnie Mae futures.

Sandor also came up with the advertising campaign seen in the button and ad below from Time Magazine’s October 27, 1975 issue.  He writes of the concept, “we should have ads with a pretty cartoon faced girl named Ginnie Mae — the personification of GNMA — winking and smiling with her name under her face.  The ad marketing campaign was controversial and at odds with the staid manner of the exchange….  Following the launch of the new contract, buttons were handed out to the members to pin on their trading jackets.”

As far as I know, this is also the earliest contract launch button the exchanges handed out. 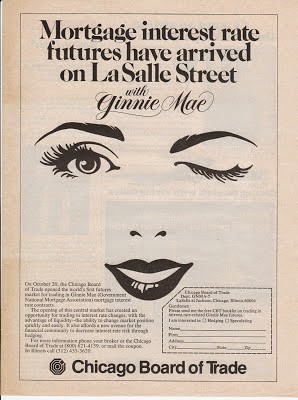