When it comes to financial futures, it is appropriate to ask who’s your daddy, because two men are credited with paternity. As a product of spending most of my time at the CME, I had always figured that Leo Melamed was widely regarded as the “father of financial futures” but upon reading Dr. Richard Sandor’s book Good Derivatives, it’s not as straightforward as I assumed.

In the preface of Good Derivatives, Dr. Sandor writes of “universal recognition afforded to me as the ‘father of financial futures” and footnotes that title as being declared by “Resolution by the City of Chicago, honoring Richard L. Sandor, August 12, 1992.” A google search of “father of financial futures” also corresponds to Dr. Sandor’s recognition as he is credited in 18 of the first 20 search results.

I’m not trying to direct credit either way or reduce credit to either men who were both essential in developing the expansive derivatives markets we have today, it was just something that struck me as notable. Nor do I have any understanding of how competitively sought this title is between the two, if at all but it’s my assumption that it is. However, it struck me as interesting that in Melamed’s 1996 book Escape to the Futures he makes a handful of respectful mentions of Sandor and none in his more recent book For Crying Out Loud, but in Good Derivatives, Melamed is only mentioned a few times only in reference to his “political skills” which is conspicuous because Sandor devotes more writing in his 600 page book to M.C. Hammer.

Clearly this needs paternity issue needs to be resolved the Chicago way…..on the Jerry Springer Show! 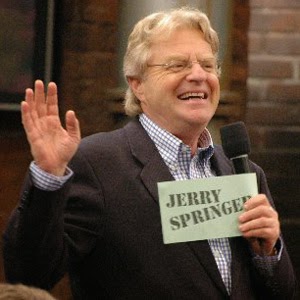 Unfortunately as of 2009, Springer no longer tapes at the NBC building in Chicago and that’s too bad because I went to a couple tapings and it was something else. 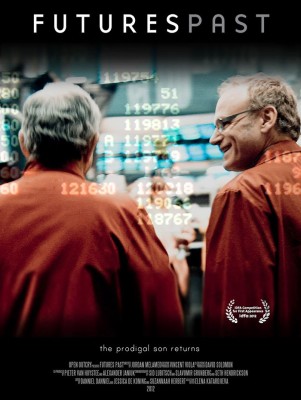 To shift gears a bit, I also just discovered that Melamed’s son Jordan has created a film documenting their relationship and the decline of open outcry trading entitled Futures Past. It appears that the film has been screened briefly at some film festivals a couple years ago but it hasn’t been released beyond that. An additional surprise about the film as well is that the Executive Producer is Vincent Viola, the head of HFT trading firm Virtu Financial.

The Hollywood Reporter reviewed the film at the following link in 2012 and a brief snippet follows:
Futures Past: IDFA Review

“As the film begins this method is being phased out in favor of a much quieter, more sedate electronic alternative known as Globex, championed by the CME’s septuagenarian chairman emeritus, Leo Melamed. Leo doesn’t hide his long-burning disgruntlement at Jordan’s mid-life volte-face: “my career didn’t take off,” admits Melamed junior, who, short of cash, returns to the pits for one last stint of trading before the final bell tolls for the old ways. Clearly in his element, Jordan Melamed proves an excellent guide to this disorientingly chaotic environment, eliciting salty testimony from the battle-hardened traders whose philosophy is “you kill or be killed.”

“But it’s in his conversations and confrontations with Leo that Jordan strikes documentary-film gold. Both of them articulate, conflict-hungry men with personal scores to settle, which they proceed to chew over on camera for our delectation. It’s intrusive, perhaps even exploitative stuff, this very publuc display of one clan’s dirty laundry. But the three credited editors ensures fairness to both sides and Melamed jr gamely includes several sequences in which his father effectively takes control of directing duties. And the process seems to prove as therapeutic for the Melamed men — Leo’s wife Betty is a serene presence, fleetingly glimpsed on the sidelines — as it is entertaining and illuminating for the audience.”