This was a post I meant to put up a while ago but kinda remain distracted by using a lot of time after and even during trading to play around w/my baby (who is asleep now so I get to blog).

As the trading pits closed in early July, there was a modest amount of media attention put towards the closure which shared the perspectives of those who remained on the floor as the pits were closing.  The history of the open outcry trading is like the marketplace, a sum of many individuals or perspectives, and anyone who worked on the floor for even weeks was able to walk away with a lifetime of memories.

It was an honor and absolute privilege to share my perspective in the Financial Times.  I’ve been a daily reader of the FT since age 20 so to be able to contribute to the world’s finest financial publication, even just for a single op-ed, was the thrill of a lifetime.  In the brief interaction w/the editors who streamlined my op-ed, I came away with a further appreciation for the amazing work the FT does to create each day’s newspaper. 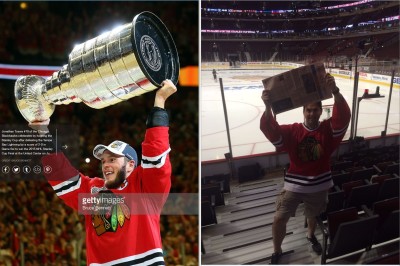 As the story went to print on the day the Blackhawks played game 6 of the Stanley Cup Finals and I knew they were going to lift the Cup that night, I posed before the game w/my own trophy which also had my name on it now.  Thankfully I didn’t jinx the Hawks and since I was at the United Center to see Toews’ first goal back in 2007, maybe it’s all just magic to coincide for a thrilling day like that.

Enough about that though…

Reuters put together a great vertical on various related articles they’d written in the months and days up to the floor closure:

Chicago Pits: End of an Era

Crain’s had a cover story on the subject which included interviews w/various people on the floor although my biggest critique is that Crain’s should’ve given way more print to what the longest servering member of the CBOT, Lee Stern, had to say:

WBEZ, being a public radio station, went with a multimedia presentation that focused on audio perspectives of older Merc traders: