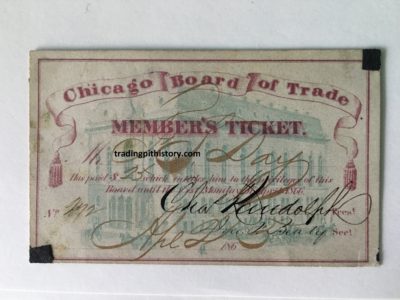 1865 Chicago Board of Trade membership card

Every collector can relate to the excitement of obtaining a highly significant item to add to their collection and I was immensely thrilled to purchase this 1865 CBOT member’s ticket from one of the world’s great financial memorabilia collectors.  I have many similar tickets from different years, even earlier than this, but 1865 is particularly significant because it was the year that the CBOT began trading standardized futures contracts and instituted margin requirements.  For many years prior, makeshift futures agreements were transacted by members, but the formality of these contracts were finally recognized and written into the CBOT rulebook in late 1865.  The name on the ticket is Mr. F.S. Day, who was listed as a commission merchant (broker) in a Chicago directory of that era I also researched.  Unfortunately, I have no idea how this piece was originally obtained and survived the 1871 Chicago fire.

To further get a sense of the 151 years since the membership ticket was issued, 1865 was the year that the Civil War ended, President Lincoln was assassinated, the population of Chicago was roughly 250k and the Union Stockyards opened in December of the year.

For a perspective on how immense the exchange traded futures markets have grown since 1865, the notional value traded on futures exchanges peaked in 2007 at $95 trillion and have since pulled back to only $69 trillion in 2013 when I was last able to find figures.  In comparison, the US stock market has a capitalization of roughly $20 trillion w/global equities at a roughly $70 trillion market cap.

Collecting this type of stuff is admittedly a nerdy hobby but much more interesting than baseball and hockey cards I grew up spending my odd job money on.  Compare this to the T206 Honus Wagner baseball card, which is the most rare ball card but has about five dozen copies in existence and the market cap of MLB baseball franchises, subjectively estimated by Forbes to be roughly $35 billion, is pretty close to the CME Group’s $32 billion value.  It’s simply a piece of cardboard, but to me this 1865 ticket is a very rare link to the origin of such an amazing industry.