I was recently thrilled to get the business card of who can be considered one of, if not the greatest execution broker in the history of the futures trading industry….Nick Leeson of Baring Futures (Singapore) Pte Ltd. 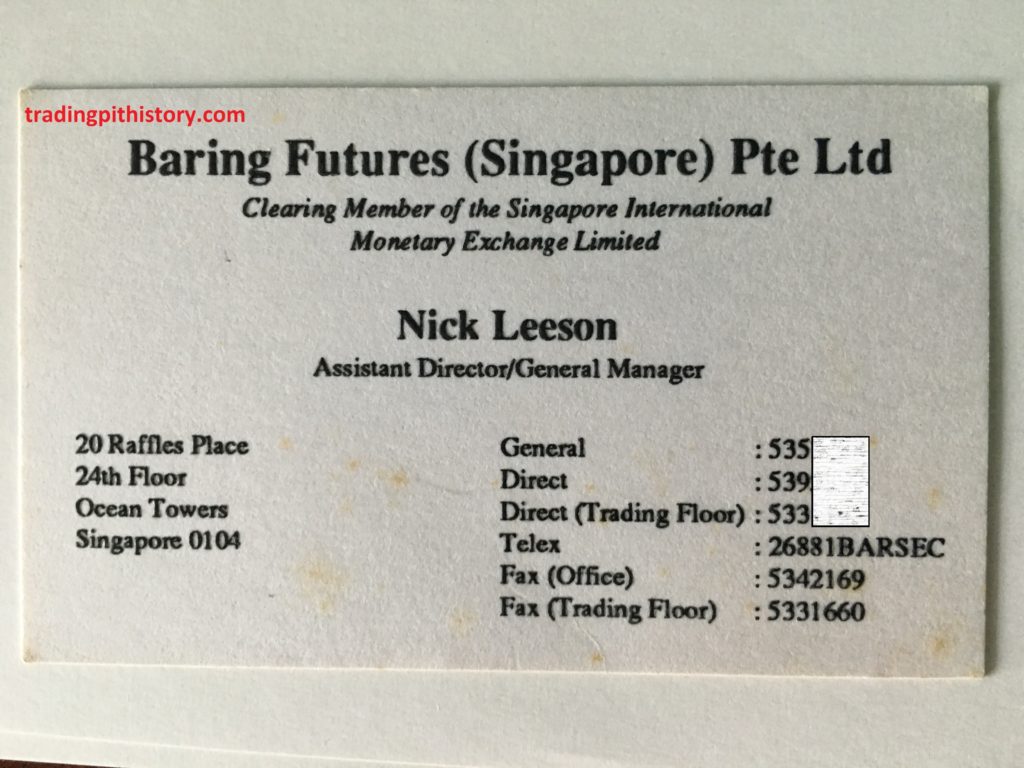 A lot of people would be puzzled for me to bestow that title upon a man who was known for rogue trading, however to his clients, Leeson was providing amazing fill prices on a regular basis, especially in futures and option spreads.  Of course the reason why this was possible is because he would often leg spreads and if the price was favorable to the client, he would proudly pass the good fill to them whereas if he was caught on a leg, that trade would get buried in the Barings 88888 error account.   Such subsidies to customers were estimated by FT journalists, Nick Denton (yes the Gawker founder) and John Gapper in their book All That Glitters, to have comprised tens of millions of GBP over a couple years.

It’s understandable why Leeson was under pressure to provide the best execution prices possible to his clients in order to maintain client flows which would help obfuscate the growing positions he was trying to trade out of in the 88888 account.  Institutional clients would often break up orders amongst different desks on the floor to make them compete against each other and Leeson was able to edge out other brokers by taking these risks which weren’t possible by others.

For those of you who haven’t read Leeson’s book Rogue Trader, I urge you to because it’s a truly a case of reality being far more bizarre of any fictional thriller and also to supplement it with a book like All That Glitters will provide an objective perspective.  Personally, my opinion is that Leeson was simply a young man who was overwhelmed by circumstances and things got carried away.  It’s the type of behavior which has happened to many in the trading pits and in his case, there just wasn’t any oversight to stop it sooner.   I actually have a lot of respect for Leeson with how he’s gotten on in life after so many tragedies such as the Barings debacle, divorce and cancer that he followed up Rogue Trader with the book Back From the Brink:  Coping with Stress.

This original Nick Leeson business card was provided by a contact who worked on the SIMEX trading floor at the same time and took some from the Barings desk after news broke of the scandal.  I’ve taken liberty to hide the phone numbers because a financial firm actually still uses the phone number today!  To the gentleman who provided the card to me for free (!), I intend to show my appreciation with a gluttonous dinner befitting the golden era of pit trading whenever travels take me to his city.