Between the market’s low volatility, playing w/my toddler and continued travels, I’ve lacked the motivation to post much over the summer. However, we spent some weeks in and around NYC so there were some speculative observations worth sharing on the blog which aren’t necessarily trading pit related but are relevant to the primitive days when humans clustered to trade.

Before reaching Manhattan, we spent a couple nights in Greenwich and on the drive in from the Northeast, passed by the Guinness World Record certified “largest single trading floor,” opened by UBS in 2002. A viral photo went around last week of how empty it currently is and the NYT wrote an excellent article last year illustrating the decline of the UBS trading floor: In Connecticut, the Twilight of a Trading Hub. In my futile attempts to find something interesting to do in the area during my stay, I noticed on the map that The Jerry Springer Show studios are now literally across the street from the UBS trading floor after the show moved from Chicago in 2009. Having attended some Springer show tapings in Chicago, strictly as an audience member, I’d recommend doing so to others because without the exposure to crazy personalities on the trading floors anymore, it’s hard to find people who speak without filter.

A Singaporean friend of this website pointed out an olde tyme documentary on the American Stock Exchange which originated on Broad Street as the outdoor based New York Curb Market. This 10 minute video illustrates the origins of how trading functioned in the street, hand signals were developed and garish, identifying clothing was utilized to be seen easily in the crowd by clerks who hung out of nearby office buildings. The hand signals which are shown in this 1957 video did not change since I sourced them for my book via this source in 2000.

To get an idea of how Broad Street looked in the early 1900s and juxtaposed against the current day, I placed the photo I took in late August 2016 against one from the early 20th century. The security barriers in Lower Manhattan make it so Google can’t streetview the area so I had to walk down there myself for the shot. It still boggles my mind that people traded this way outdoors in all weather, especially when there are sites like roboforex that are around today. The trading environment has changed so much and brokers don’t even have to get out of bed in the morning if they don’t want to. Most tradings can now be done on devices, making it available from pretty much anywhere. I also bought a second copy of The Curbstone Brokers while browsing through Strand books in order to read more of this history while in NYC. However, one thing that was never mentioned is how the trading dealt with vehicles passing through the trading area which, after all, was a public street. Since I played a fair bit of street football and hockey growing up, I imagine they dealt with it just as we did, with similarities to the classic scene of Wayne’s World by yelling “Cart!” and moving out of the way then regaining their spot with a yell of “Trade On!”

The Curb Market moved indoors in 1921 and the building remains on Greenwich Street but is vacant and seems to have been so for quite a while. Another blogger did a good write up describing the history of this building and circumstances of moving trading indoors. Amusingly, it was not surprising to read of those who fought the change and this quote of a curb broker was included from The New York Tribune, “That’s all nonsense about the city clearing the street and forcing us off. We’re citizens and we have a permit from the city to trade here…We’re not obstructing the traffic and we’re minding our own business, and open air trading is going to continue.” 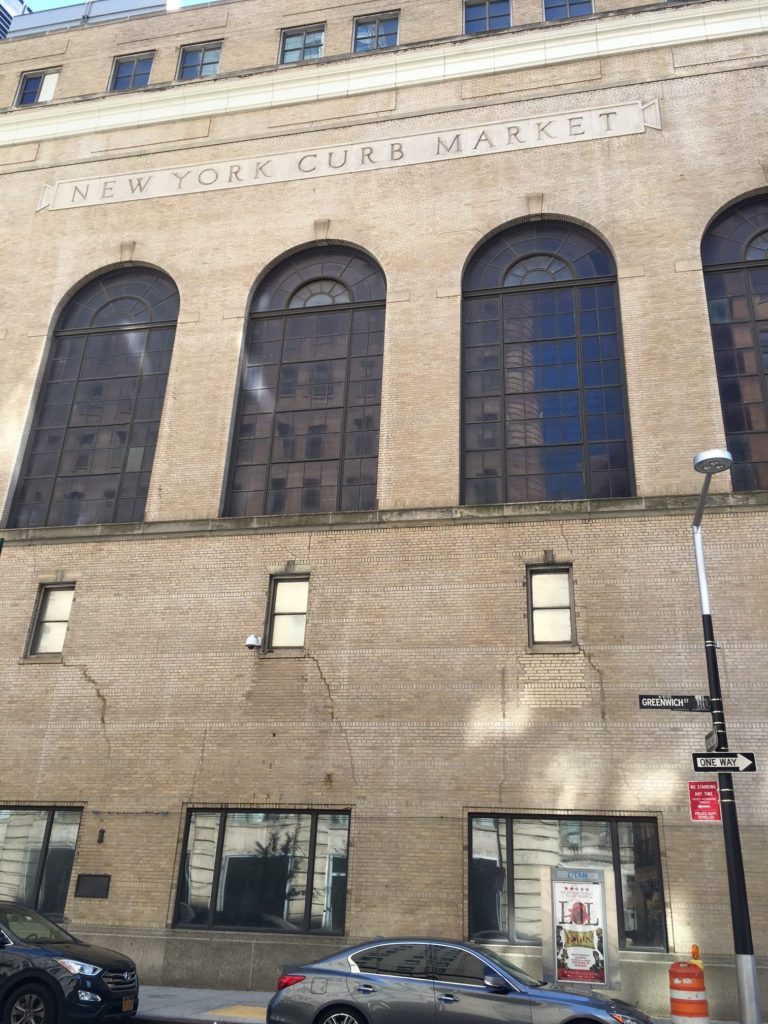 Whenever I find myself on Wall Street, it’s always a pleasure to admire the NYSE building for what it represents, even though I avoid equity trading. Art Cashin has been at the NYSE since early 1960s so I was excited to read his 1999 book A view of Wall Street from the seventh floor which was written to celebrate the Stock Exchange Luncheon Club, however the book was a disappointment that had few entertaining floor stories and dryly rehashed Lower Manhattan history instead.

Finally, one thing I’ve always been puzzled about is the wide fascination w/Jesse Livermore. Among the first things I was told on the trading floor was that “you’re only as good as your last trade” and in Livermore’s case his last trades wiped him out to the point he put a bullet in his head at the Sherry Netherland hotel just off Central Park. Perhaps if I stopped in at the bar in the Sherry Netherland for a drink w/the Boy Plunger’s ghost, I’d understand better and will do so next visit. Reminiscences is an interesting story but one certainly not to emulate with how life turned out after the book. Livermore’s great-granddaughter instead offers much more straightforward work to interpret.