Occasionally I come across a treasure trove of media from the golden era of open outcry trading and this collection of raw footage from Media Burn’s independent video archive is not to be missed!!! It appears that all the raw footage was shot for a local Chicago show hosted by Studs Terkel, Chicago Slices, although a polished edit for some of the footage of the old CBOT bond room in 1993 focusing on hand signals is entitled For Cryin’ Out Loud:

The old bond room at the CBOT was before my era so the raw video atleast gave me a sense of how incredibly crowded it was and the raw footage was like walking onto the trading floor again.  Anyone who did work in the old CBOT bond room will certainly love these videos because it’ll place them right back in there 23 years ago. 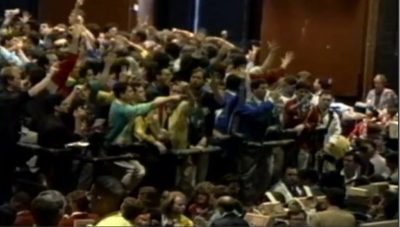 I can’t embed the primary clip which the above screengrab came from but the link to the hour long raw footage is linked here.  This particular clip starts off on the streets of Chicago and then transitions from the trading floor turnstiles to walking on the floor and observing w/a little narration by an exchange member. 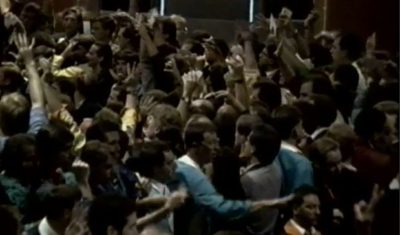 A second batch of raw footage starts in the morning of a desk broker for his commute to the CBOT where he describes the floor and then shows footage of the trading floor.  This clip also can’t be embedded so the link for it is here and the footage for the CBOT section starts around the 25:00 minute mark. 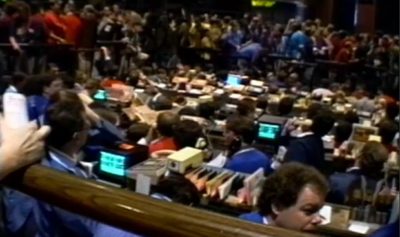 In this batch of raw footage was also an hour long clip of the CME upper trading floor with tour and commentary from a member who I’d suspect to be Steve Urkel‘s dad.  Once again, it’s not possible to embed the clip but you can click the link for it here. 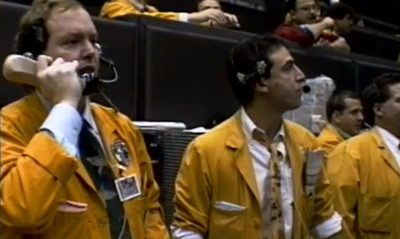