Visiting the iconic NYSE trading floor was something I’ve always wanted to do, but didn’t really pursue it since I’ve never been interested in the individual equities markets.  I had gone to the NYSE viewing gallery in 2001, before it was shut post 9/11, although there is a huge difference between observing from the gallery and walking the actual trading floor.  However last year, I was the high bid at a charity auction for a NYSE floor tour donated by ICE and made the visit recently in early March.  Taking along two of my best buddies that I met through my career on futures trading floors really made the experience all the more special.  The staff at ICE who gave us the tour provided a lot of historical and contemporary insight to the NYSE trading floor and were excellent stewards of the organization. 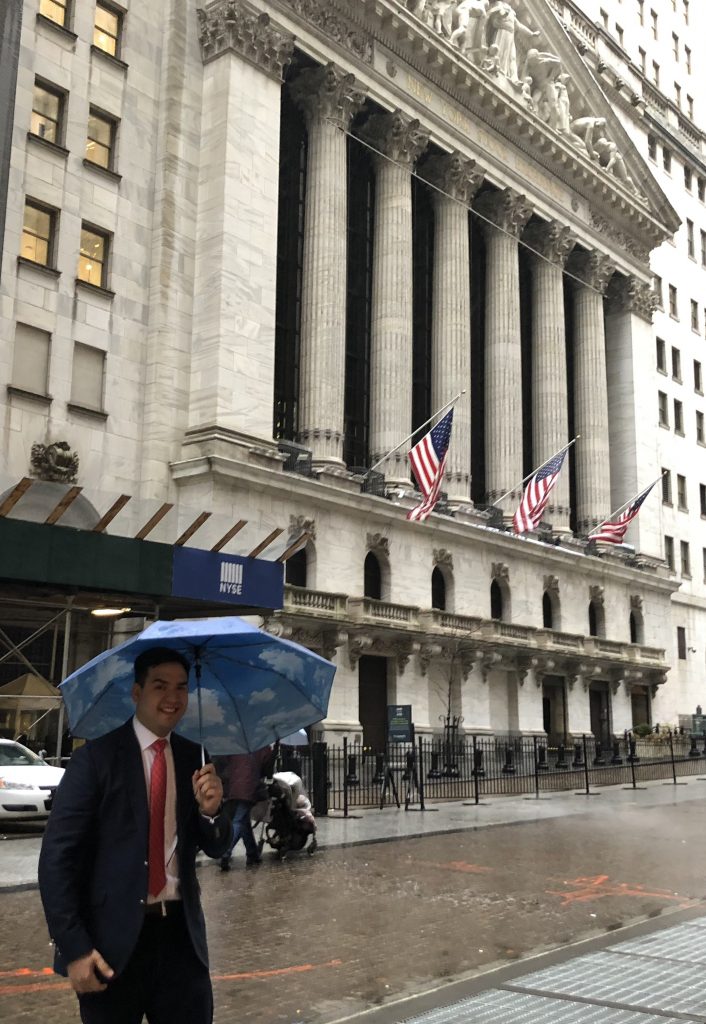 After proceeding through security, a number of historical documents and memorabilia were on display such as shown in the following photos. 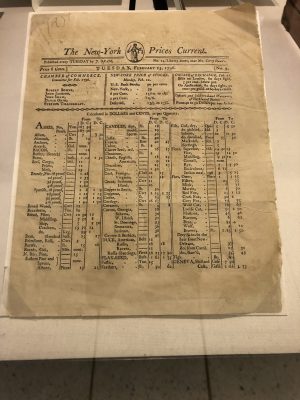 This issue of The New York Prices Current was published in early 1796 and listed market values for various commodities along with prices of two stocks, the Bank of the United States and the Bank of New York at the top of the sheet (click photo to enlarge).

Buttonwood Agreement on display at the NYSE

On display as well was the Buttonwood Agreement which set the foundation for what would eventually become the NYSE.

We also dropped into what was the Stock Exchange Luncheon Club, now shuttered but still used as an event space.  A mural depicting the signing of the Buttonwood Agreement underneath the buttonwood tree is displayed prominently in the space.

Before moving on to the actual floor, a quick introduction to how the NYSE trading posts have changed throughout the years is worth reading at this link:  Evolution of the Trading Post on the New York Stock Exchange 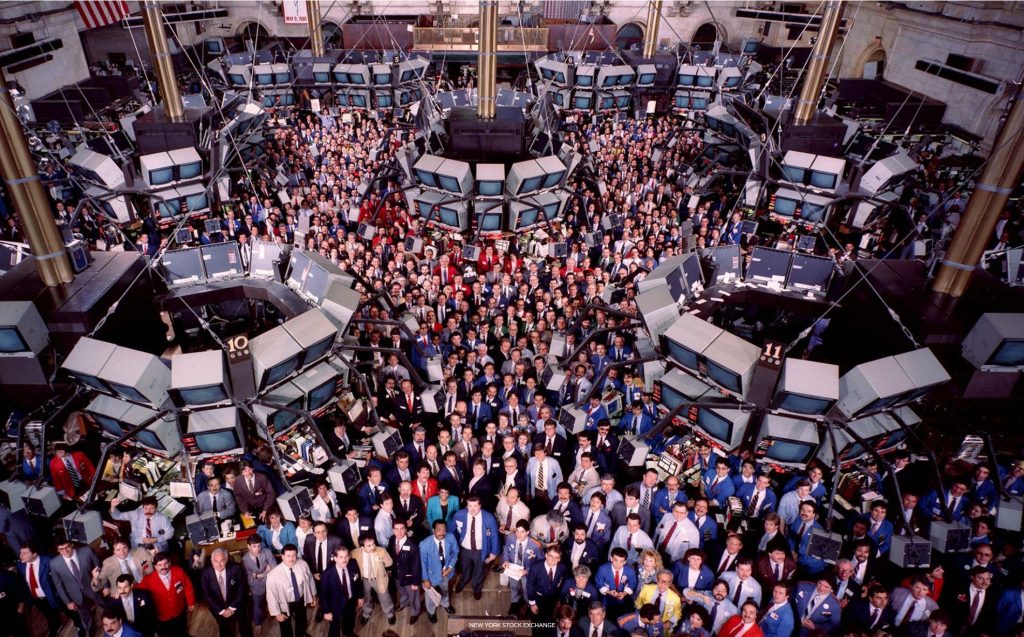 In doing a little research before the trip, I came across the above photo which Neal Slavin nealslavin.com took of the NYSE floor in the mid 1980s and it does a great job capturing how populated the floor was at it’s height.  I’m unable to find the article Mr. Slavin describes the photo but it was something along the lines of he spent 12+ hours getting the lighting to how he wanted it and only had a few minutes before the opening bell to take the photo. 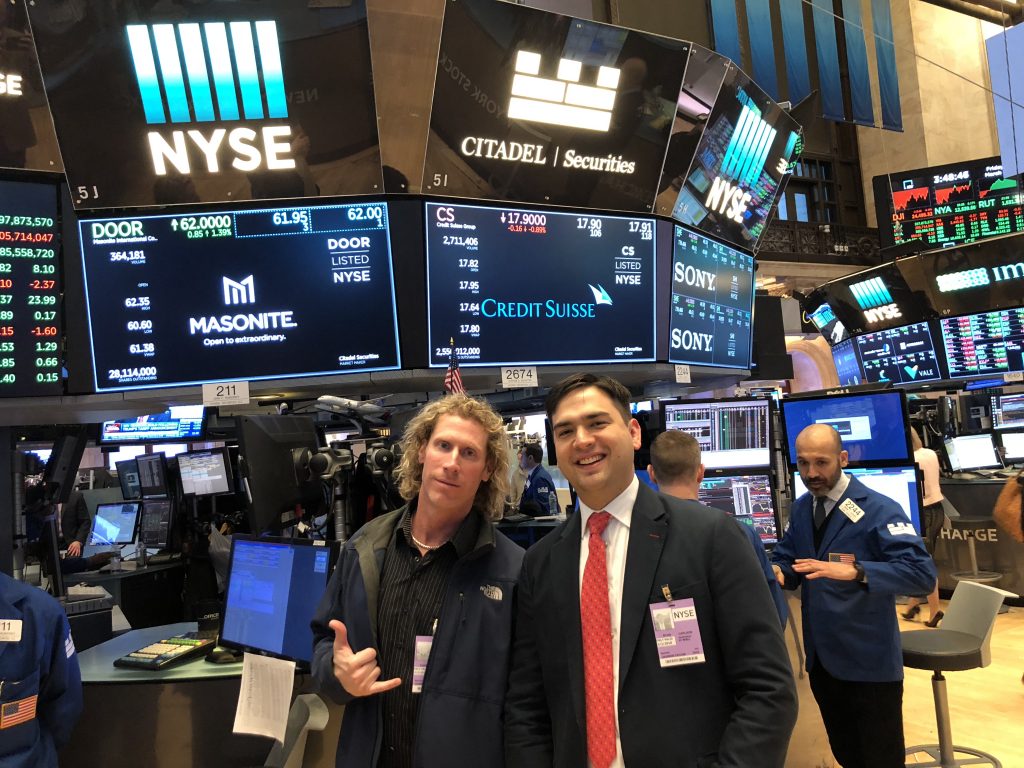 On the NYSE floor with my good friend Dan

On the day of our visit, the closing bell was being rung by Masonite, ticker symbol DOOR, so we dropped by the post trading it for a photo.  We got a chance to speak w/various people on the floor and while it doesn’t appear that they are very active most of the day, there are a few niches, including the close and IPO launches, which they still play a role for.  A couple weeks after my visit, the WSJ wrote an article describing how the close now represents 26% of NYSE volume and some brokers now don’t even show up until after lunch.

The closing bell is pretty much a spectacle to add excitement for a listed company, charitable cause or prominent public figures celebrating an achievement or anniversary.  In reading the guidelines, they seem pretty strict to keep it to that certain profile and a quick look at the calendar here illustrates the types of organizations who are ringing it in the coming days.  The history of the closing bell can be read here and a video of the ceremony on the day we visited can be viewed here.  The bell is really loud as you might imagine since it was meant to be heard throughout the floor, once jammed with a population of thousands at it’s peak. 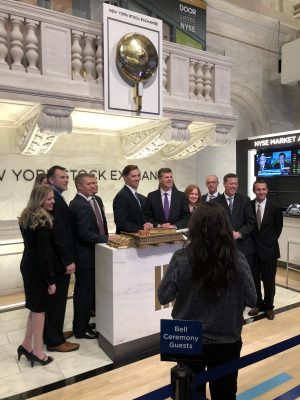 In the minutes before going to the upper podium, the closing bell guests stand beneath it for photos and to sign their name in the book of distinguished NYSE guests. 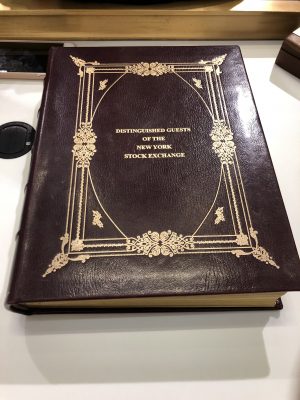 Distinguished Guests of the New York Stock Exchange book, my signature is not in it

Although we didn’t get a chance to get on the podium for the closing bell, we were able to get beneath it afterwards for a photo.  There was definitely a lot of nostalgia on the trip for me since I started out in my Kansas hometown working for a couple stockbrokerages doing gruntwork as a teenager before starting to work on the KCBT floor at 18.  Almost twenty years since I was last keying orders into a green screen Quotron to the same NYSE floor I was now standing on, it was great to be beside two of the greatest, most trustworthy people I met along the journey (and Christian’s lovely wife). 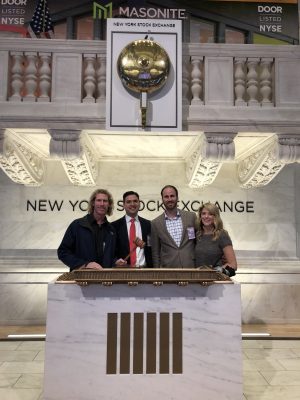 One other reason for the trip to NYC was that my buddy Dan and I have had an ongoing bet for the past 15+ years of whoever has the highest trading P/L on the year has to pick up the tab at a huge dinner.  For me it’s always been incredibly motivational to keep at it throughout the year and push for the honor of paying….and every year we talk about how grateful we are to still be in the game trading for ourselves.