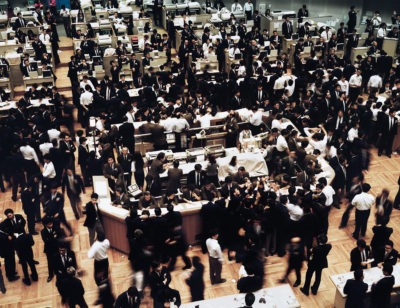 Once again, it’s been a while between posts as I had to have a friend sort out some technical issues with the website hosting, been busy with trading, living life and also working on another creative project I’ll elaborate more about later on.

All the talk about social distancing or even canceling the Olympics in Tokyo makes me long for some Japanese open outcry trading and in a deep dive on the subject, I actually found that the Japanese exchanges had a long history of using trading floor hand signals.  The following videos show how the Japanese traded open outcry at the Tokyo Stock Exchange.  To get a closer understanding, I used youtube’s transcript feature and then plugged the Japanese text into google translate along with asking a Japanese friend that I met at the CBOT (one of my first friends from the floor as he was a former yakusa enforcer who ended up at the CBOT, which is a wild story in it’s own right, but both of us knew no one else on the floor starting out, so we hung out together a fair bit and remain friends).

I couldn’t find any information on the origin of Japanese stock trading hand signals so if anyone can add to this in the comments, please do so.  Previously, I did cite some history about a Harvard Business Review study on the Dojima Rice Market and the Origins of Futures Trading, which also showed that dumbass trading clerks are just as old as the futures industry.  The Tokyo Stock Exchange (TSE) was founded in 1878, consolidated with other exchanges as part of the Japanese Stock Exchange in 1943, shut in 1945 and then reopened as the Tokyo Stock Exchange in 1949.  It’s also interesting that the TSE floor served as the General Headquarters of the Allied Forces after the war until 1948.

One of the most striking things about the Tokyo Stock Exchange trading floor is how there is zero individuality that stands out with everyone, besides exchange staff in brown suits, all dressed identically in a dark blue or black suit over a white shirt.  Of course there is zero racial diversity so everyone is Japanese with dark hair and while there has always been a method to the madness of every trading floor, the approach of the Japanese was certainly unique.  (The uniformity of those on the Japanese floor brings to mind the Simpsons episode from 1991 where Homer is accused of being a “free-thinking anarchist” because his white work shirt was accidentally dyed pink and he was the only one at work not wearing a white shirt.)

The first set of videos is the most comprehensive and stems from the late 1980s or early 1990s in the TSE trading floor that opened in 1985.  I’d recommend turning on the closed captioning (CC button and then going to Settings (the sprocket looking button next to CC) and then turning the language from Japanese to auto translate into English).  The video is split into two, roughly 10 minute clips and the example of specific hand signals straddles both clips.  It was good to see that the TSE hand signals had similar shortcuts like drinking a beer to indicate Kirin Beer, signaling a rowboat for NYK shipping lines, mimicking driving a car for Toyota, etc….

For some raw footage from the visitors gallery during the Bubble era, this video shows how full the TSE floor was at it’s peak around 1990 when over two thousand workers were on the floor.  Apparently the TSE had a jackets optional dress policy in the summer months so it’s all a sea of white shirts on the trading floor.  Also seen is the one and only hand signal robot at 8:02 of the clip.

This next video appears to have been taken towards the last day of what’s referred to as “Gekitaku trading” in 1982.  The JPX website refers to this as “group competitive call auction trading” which began in 1900 and I don’t really understand it entirely, but if interested you can read about it starting on page 184 of this linked PDF.  Opening and closing of this style of trading is initiated with an exchange official using a wooden clacker, now that’s old school!  The second part of the same video shows the closing of the TSE trading floor in 1999 and is rather boring.

Next is a video from around 1960 of the TSE which was made to highlight the postwar recovery.  The video isn’t entirely about the TSE so I linked it to begin where the trading floor section starts at 5:16 of the video.  A portion of the video explains how hand signals were used on the trading floor with similar examples to the first video of this post.  There is a second part to the video without closed captioning offered, but doesn’t deal much with the trading floor and by appearance, mostly the back office and continues on about Japan’s industrialization.

To wrap up this post, the last short video is of the TSE in 1935 and I was surprised to see young women working as clerks on the trading floor because in later clips, it’s an all male environment.