In 1878, Ruben S. Jennings received US Patent # 203837 for the trading pit. Soon thereafter, Jennings proceeded to sue financial exchanges such as the CBOT for it’s use and the result was that Jennings lost and his patent was invalidated. 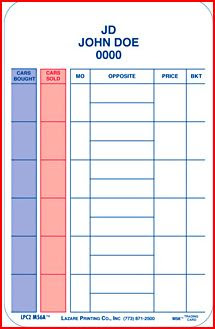 A quick explaination on how the above card functions: At the top is the traders badge (referred to as “mnemonic” at LIFFE) of “JD” and below is his name “John Doe” and then the account number of “0000.” The left two columns are where the trader writes the quantity of contracts that are bought or sold. It’s listed as “Cars Bought” and “Cars Sold” which originated from grain trading and each contract was referred to as a car because the quantity of one contract was roughly the amount of grain held in one railcar. The “MO” column is where months are listed via their designated month code letter and the 12 months starting with January are F, G, H, J, K, M, N, Q, U, V, X, Z. The code for the contract is written above the month code, for instance ED for eurodollars. If the transaction is part of a spread trade, there is a diagonal slash through the “MO” column and an S is written below the slash to designate that it was one leg in a spread. “Opposite” is where a trader lists the one, two, three, or four letter badge of the person they traded with and below the badge is the three digit number of the clearing firm which processes and guarantees the trade. “Price” is obviously the price at which it was traded. “BKT” is the code letter for the 15 minute time bracket that the trade was done in. Each exchange has a different trading card and the above example is the style at the CME.

Also, generally on top of each card is a thin carbon duplicate which is torn off and kept by the trader or their trade checker (who confirms trades in the pit w/the counterparty). The card itself goes to the backoffice to get the information punched in and is kept by the clearing firm. After the FBI sting in 1989, it became required that only ink can be used to write on cards and no pencils. 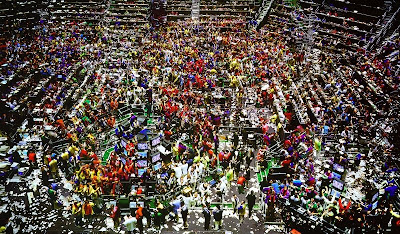 Click on above photo if you want an enlarged view of it.

One of the most famous photographs of the trading pit, Andreas Gursky‘s Chicago Board of Trade II has become popular to the point that the print is in very short supply. I’ve only seen one available on the web and it’s for $2500 which is amazing since it cost me approx $50 less than a decade ago. Mine isn’t for sale but a friend of mine might be willing to part w/his, email me if interested.

Gursky took the photo from the CBOT visitors gallery in 1999 and also has some other photographs of trading pits which are owned by Deutsche Borse. Some such photos are can be viewed by clicking here. I believe that Chicago Board of Trade II is in the Tate Collection in London.

Another great resource of photos of the pit is Getty Images. To purchase the photo licenses aren’t cheap but they have a good inventory of them.

If for whatever reason you wanted to get a trading jacket designed for yourself, the Chicago based company PECO is in the business of making them. Check out their website for more information: 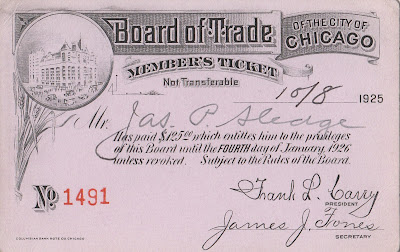 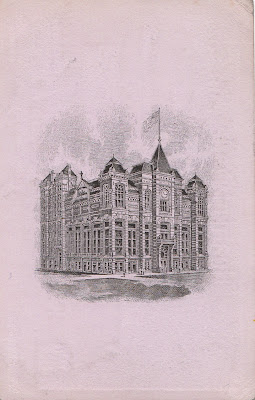 Board games company Parker Brothers developed a game called Pit in 1904 based upon the action of the open outcry trading pit. The premise of the game is to ‘corner a market’ through a participant trading cards with others in hopes to hold every card issued for a particular grain. The edition photographed below is the 1919 edition but new additions are still manufactured and available for roughly $10-15. The best description of the history and method of playing is available at this wikipedia link: http://en.wikipedia.org/wiki/Pit_(game) 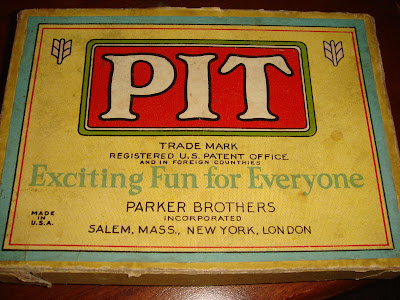 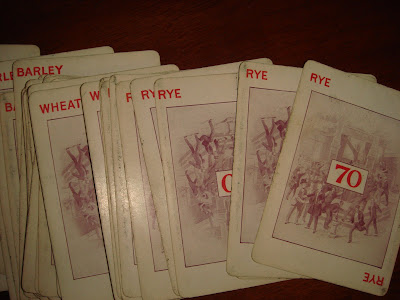 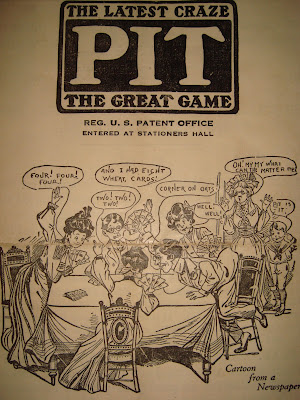 This piece was obtained by a former CBOT member who received it when the old visitor’s gallery was torn down. I’m not sure when the quoting of grains went from 1/8th of a cent to 1/4ths of a cent so please inform the blog by emailing tradingpithistory ‘at’ gmail.com or writing in the comment box if you know so. Thanks! 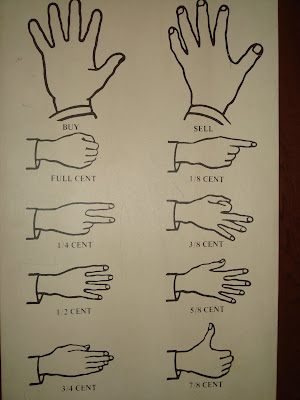