Fist mimics jamming something into head. Two handed version is one fist jamming into other fist. 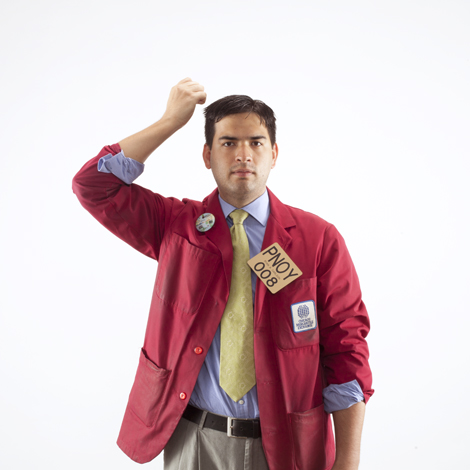 Fist mimics jamming something into head. Two handed version is one fist jamming into other fist.
"Jan" sounds similar to "jam."

The hand is cupped with the thumb pointed inward toward palm.
Commodity code for February is "G."

Index finger and thumb are formed into a right angle.
Commodity code for April is "J."

Hand grabs lapel of trading jacket.
Reference to the actress Mae West, who had large breasts.

Hand touches top of head.
Indicating "me," which sounds like "May." This version is from the 1940s.

Index finger is pointed at eye.
Eye rhymes with July.

Hands are held with fingers extended and brought together at 45-degree angle.
First letter of month.

All fingers are pointed upward to form the letter "U."
Commodity code for September is "U."

Index finger is extended outward and draws the letter "S" in the air.
First letter of month. This version is from the 1940s.

Fingers are curled to form the letter "O."
First letter of the month.

Tip of middle finger is pressed to tip of index finger.
Fingers form the letter "D" in the space between them. Also resembles "X" for Xmas.

Futures and options contracts are standardized for monthly expiration cycles and different hand signals evolved to signify each month. Like most signals, the monthly signals were developed based upon simplicity and sometimes based upon the letter of the alphabet which serves as an industry code for each month. For instance, the commodity codes are F - January, G - February, H - March, J - April, K - May, M - June, N - July, Q - August, U - September, V - October, X - November, Z - December.