Hands are held with fingers extended and brought together at 45-degree angle. 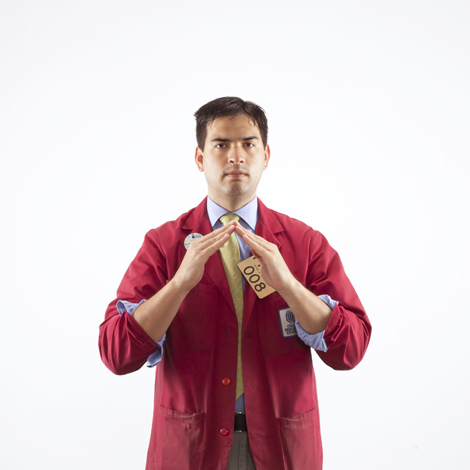 Hands are held with fingers extended and brought together at 45-degree angle.
Roof of house.

One hand is held at 45-degree angle with fingers extended.
Roof of house (shorthand version).

Hand is held above head with index finger extended downward, then rotated in circles.
Most traders in the pit are locals.

Thumb and index finger are pressed together and held to mouth.
Smoking a joint.

Fist is held at arm's length and moved in side-to-side arc.
Steering a car.

Index finger is extended and held beneath nose.
Hitler's mustache.

Index and middle fingers are opened and closed while moving across body.
Cutting shears.

Hand slaps back of neck.
Pain in the neck.

Index finger is extended outward and draws the letter "S" in the air.
"S" is first letter of the firm's name.

Fingers are wrapped around knot in tie.
Bankers' ties.

One hand rings eye and other extends out in circular form as if holding spyglass.
Trader's last name sounds similar to "scope."

Cheeks are filled with air.
Trader was known to be loud and exuberant.