Thumb and index fingers are held to form the letter "L." 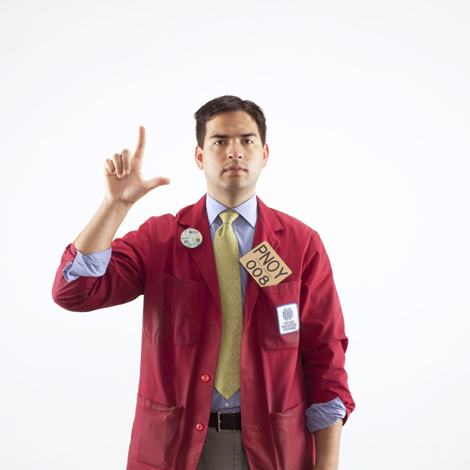 Thumb and index fingers are held to form the letter "L."
"L" in locals.

Index and pinky fingers are pointed downward.
Fingers form part of the letter "M" for the last name of the firm.

Thumb and pinky finger are extended upward.
Fingers represent the letter "W" for first letter of the firm's last name.

Index and middle finger are extended and held beneath nose.
Hitler's mustache.

Closed fist is held at arm's length and moved side-to-side with slight arc.
Steering a car.

Index finger is pointed outward and thumb is moved up and down.
Wild West pistol.

Thumb is pointed downward from fist.
Opposite of firm slogan "The bank that likes to say yes."

Index finger is extended and pulls back corner of eye.
Stereotype of Asian with slanted eyes.

Both hands are joined to form triangle above head.
Traditional hat worn by Asian agricultural workers.

Hand is held over heart.
Americans place hand over heart during national anthem.

Tounge is pressed against cheek while hand is raised to mouth.
"BJ" portion of firm name. Signal used also for firm Hoare Govett as Hoare sounds like whore.

With fingers curled as if holding an apple, trader mimics taking a bite.
Eating a Fuji apple.

One hand mimics injecting syringe into other arm.
Injecting heroin.

Fingers are formed into "O" and moved back and forth at belt level.
Play on "cock" in firm name.

Index finger is pointed at ring finger on opposite hand.
Pointing to where a gold wedding ring is worn.

Index finger is pointed to wrist of opposite hand.
Swiss-made watch.

Fist is struck against open palm of opposite hand.
Morgan Guaranty Bank is referenced by the stamp, as if guaranteed.

Both hands mimic holding reins.
Lloyd's logo is a horse.

Index finger extended outward and draws an "S" in the air.
"S" is first letter of firm's name.