Hand is held above head with index finger extended downward, then rotated in circles.

Most traders in the pit are locals. 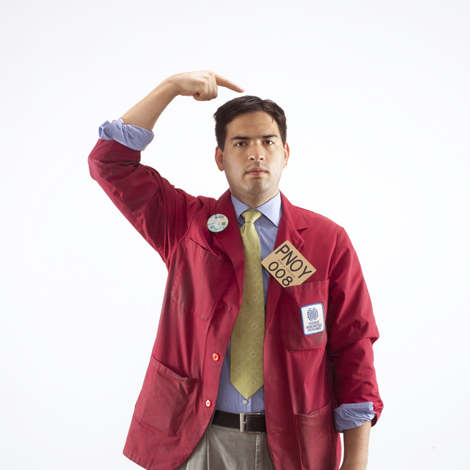 Hand is held above head with index finger extended downward, then rotated in circles.
Most traders in the pit are locals.

Thumb and index finger are held to form the letter "L."
Letter "L" in locals.

Hand is held with palm upward with fingers wiggling.
Barings sounds like "bearings."

Index and middle fingers are opened and closed while moving across body.
Cutting shears.

Thumb and index finger are extended to mimic gun.
JP Morgan reportedly used the sales of defective rifles to launch his banking empire.

Hand is extended to mimic placing key in lock.
Company logo is a key.

Thumb, index and middle fingers are extended.
Firm's clearing number was 007, so it's the James Bond pose as the fingers are supposed to mimic a gun.

The hand is cupped with the thumb pointed toward the palm.
First letter of company name.

Index finger is held to ear while hand is wriggled at wrist.
"Digging for gold" is slang for removing wax from ear.

Middle, ring and pinky fingers are bent at knuckles.
Firm's clearing number was 350; signal corresponds to "three half."

Fingers are cupped to form the letter "C."
C is first letter of the company's name. Also this was formerly used for Citigroup before they left and previously to that Credit Suisse.

Fist is moved downward.
Tullet sounds like toliet and signal is to mimic pulling a toliet chain.

Index finger is extended upward and moves up and down.
In Singapore, this signal is used to indicate died or dying and that sounds similar to company name.

One hand scratches opposite forearm.
Yamaichi sounds like "itchy."

Fingers are cupped to form the letter "C."
C is first letter of company's name. Also this was next used for Cargill and previously to that Credit Suisse.

Both hands are cupped against chest.
Firm was abbreviated BT, which traders called "big tits."

Index finger is extended to side of head and moving in circle.
Hokkien word for "crazy/ mad."